This story began way back 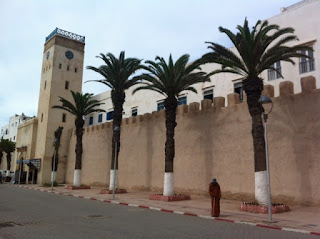 We're speeding along, playing old songs by Eurythmics and Simon & Garfunkel, reminders of another era. I'm laughing because Tim knows all the lyrics, and because it is good to see his younger self coming out to play after months of back pain and hard work.

We drive past the port at Casablanca, the largest in Africa. It was from here, 23 years ago, that Tim and his buddies shipped their two Landrovers to Ivory Coast, after facing closed borders that prevented them from taking their long-planned trans-Sahara route.

This time, we cruise along the motorway passing Casablanca en route to Marrakech and from there to Essaouira. In all the newness of this recent season, we carry with us a sense of history. It is a story that goes further back than our 14 years of living in sub-Saharan Africa, further back than our shared hitch-hiking adventures and Tim's trans-Africa trip, to 1977 when his parents drove the family from England to Nigeria. On that occasion they had been able to cross the Sahara, in so doing weaving a story that has found its way into the crevices of our lives, in the same way that sand is found in odd places long after a trip to the beach.

It is a curious thing, this newness following on the heels of an older narrative; as if we write on pages left blank in a book already half-filled. The pages written before lend a familiarity, a sense of normality to that which is new, unknown, unfolding.

Adventure, risk-taking and discovery are part of who we are. The first pages of our storybook feature chapter upon chapter telling of God's faithfulness, goodness, and nearness even as we ventured further and further away from home. Many chapters are illustrated with pictures of landscapes much like the one through which we now pass - spiky plants in arid soil; sun-kissed passersby in their colourful clothes; bartering in markets filled with just-picked fruits and hanging meats; roads filled with crazy drivers in over-laden vehicles who, every now and then, are stopped at lengths of upturned nails manned by local police.

The last 4 years of living in England and Spain have felt unfamiliar. At times I have wondered whether I am still recognisable as myself in this new season. But a short ferry ride away and we are again on African soil.